To celebrate the 80th anniversary of 311 (Czechoslovak) Sqn on 29 July 1940, a commemoration service was held in the memorial garden at RAF Honington, Suffolk.

The Honour guard comprised of members of the Czech Airforce and a representative of the Thetford Branch of the RAF Association with their respective standards.

The ceremony was opened by Colonel General Staff Rudolf Straka, Commander of the 22 Helicopter Base, Náměšť nad Oslavou, now home to the 311 (Czechoslovak) Squadron ‘Biscay’ who said: “The permanent mission of the Armed Forces of the Czech Republic is to take care of military traditions, preserve and disseminate existing veteran links. Our base is the successor of the traditions that are based on great work of predecessors, following the 311 RAF (Czechoslovak) Bomber Squadron. In 1990 was the base awarded the historic honour name „Biscay“ by the President of the Czech Republic Václav Havel. It represents symbolic historical link between the 311 Bomber Squadron and our base.”

RAF Honington Station Commander Group Captain Matt Radnall said: “We are honoured to host this commemorative service in aid of the 80th anniversary of the formation of No. 311(Czechoslovak) Squadron formed here at RAF Honington on this day in 1940. During the second world war over 500 Czechoslovaks serving in Allied Air Forces were killed. Of these, 273 died while serving with 311 Squadron. Today it is fitting that we mark the Squadron’s formation with a simple ceremony in our memorial garden to ensure that their sacrifice will always be remembered.”

He added: “There is added significance as we also mark the 80th anniversary year of the Battle of Britain, during which Czechoslovaks played a critical and courageous role.”

Group Captain Radnall also mentioned that the main idea of today’s ceremony was the encounter at the same place and date after eighty years of the squadron forming. „We wanted to commemorate and to pay tribute to all the brave people who brought enormous personal sacrifice fighting against evil during the Second World War as a part of  RAF.” 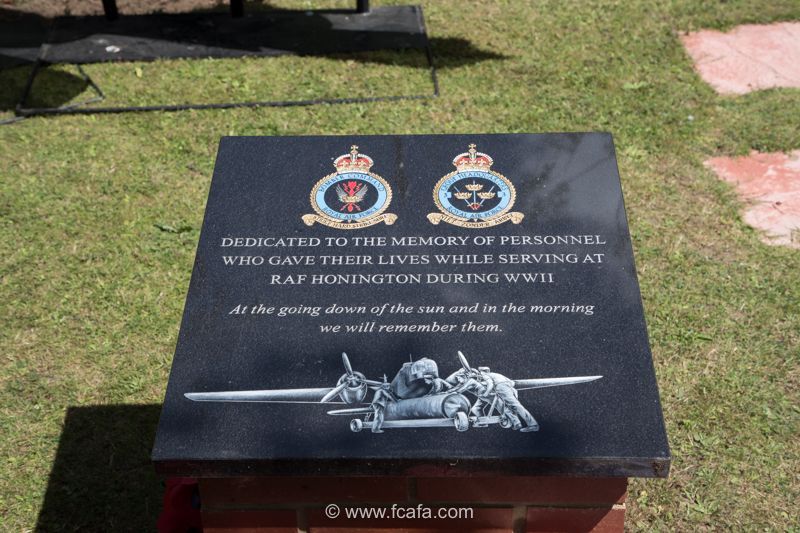 Wreaths were then laid at the memorial to remember all who had given their lives whilst serving at RAF Honington during WW2.

The bugler playing “‘he Last Post’, followed by a 2 minute silence, the bugler then played “Reveille. The ceremony concluded with the National Anthems of the Czech Republic, Slovak Republic and Great Britain being played.

To commemorate this event, a liden sapling, the national tree of the Czech Republic, which had been brought over by the Czech delegation, was planted, in the memorial garden and an information plaque placed alongside. A helicopter flypast concluded the event.

🛑 311 (Czechoslovak) Squadron was the only Czechoslovak-manned bomber squadron of the RAF during WW2. It suffered the heaviest losses of any Czechoslovak RAF squadron.

🛑 It was originally equipped with Wellington bombers and flew over 1000 missions with RAF Bomber Command before the squadron transferred to RAF Coastal Command where they flew 2111 patrols.

🛑 From April 1942, the Squadron flew from Talbenney with Wellington aircraft on anti-submarine patrol duties in the Bay of Biscay. In Spring 1943 the Squadron was redeployed to Beaulieu where they converted to 4-engined B24 Liberator, which were more suited to long-range patrols. They later redeployed to Predannack, Cornwall, before moving to Tain, Scotland. The achieved the highest success rate of any Coastal Command squadron.

🛑 A member of 311 Squadron, P/O Arnošt Valenta, became a Prisoner of War and was murdered by the Nazis after escaping from Stalag Luft III in “The Great Escape”.