Running for the Few

Jonny Cracknell in the cockpit of the Josef František Hurricane.

To commemorate the 80th Anniversary of the Battle of Britain we are running a total of 80 miles in just 5 days. Commencing 5 October, Jonny Cracknell, Chris Marsh and Chris Scott will be starting this 80 mile run from Duxford. The Support team is lead by Iain Willis.

Our objective is to raise as much awareness as possible, in this poignant anniversary year, for the courageous ‘Few’ – the young men who defended Britains skies during 1940 from the relentless German Luftwaffe and an inveitible invasion. There is now just only one known surviving aircrew alive from this historic Battle, Gp Cpt John ‘Paddy’ Hemingway DFC, who turned 101 in July. In tribute to this hero, alongside all of his comrades, we hope to continue their memory by raising much needed funds to support both the National Memorial to the Few at Capel-le-Ferne, and the Kent Battle of Britain Museum Trust at Hawkinge, who receive no public funding. Particularly with the impacts of Covid on them opening their revenue streams have been severely impacted.

The route will see the team run between 16 significant Battle of Britain Fighter Stations and locations in the UK, these being: 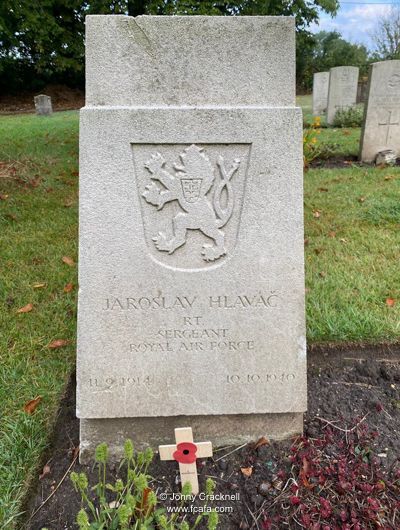 As a means of simply paying their own respects and; remembrance, the team have been laying Royal British Legion remembrance cross’s at various Battle of Britain pilots graves.

The team have so far laid 120 memorial crosses at resting places of the Few, across 12 counties in the UK – with plans to lay another 30/40 either before or during then run. Czechoslovak pilots remembered include Václav BREJCHA, Josef DYGRÝN, Josef FRANTIŠEK, Jaroslav HLAVÁČ, Vilém KOSARZ as well as the 310 Sqn Airmen’s Memorial Plaque at Duxford.

This has also allowed them to share many individual stories from all nations, ages and backgrounds on a daily basis on social media. It is hoped that it will help people relate more to the Battle of Britain by seeing the young faces and reading the diverse stories of heroism all those involved.

Like Loading...
This entry was posted in 310 Sqd, 312 Sqd, Battle of Britain, Events, Forthcoming Events. Bookmark the permalink.